The Sabbatian roots of the Golden Dawn

It is my strong conviction that the two parts of the Golden Dawn tradition, as it exist today, the Qabalistic and the Hermetic, didn’t originate solely through the scholarly research of William Wynn Westcott and Samuel Liddell MacGregor Mathers, as is often asserted today and by historians of the Golden Dawn as Ellic Howe, R.A. Gilbert, Nick Farrell, Ian Cowburn, et al.

I do however acknowledge that some of it was originally created by the collaborated efforts of Westcott and Mathers, as for instance the Enochian magical system, which I believe is truly unique. Some other parts were probably brought in by Westcott and Mathers from earlier order affiliations, such as Societas Rosicruciania in Anglia (S.R.I.A.). The connection with the S.R.I.A. can superficially bee seen in: 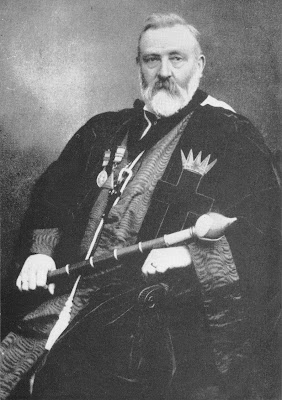 W.W. Westcott dressed up in his Supreme Magus regalia

Although I also believe that Mathers actually received much of the Second Order material through the hands of Lux Ex Tenebris, such as the Adeptus Minor Ceremony and Z-documents, amongst other material, I also don’t contest the possibility that he, perhaps in collaboration with Westcott as Nick Farrell asserts, also developed parts of that material further, as the design of the Vault for example. It is however very hard to establish exactly how much was developed from the material Mathers received from L.E.T. for someone not being in possession of archives of the old Rosicrucian school behind the Golden Dawn.

I can also see some influences from Sigismund Backstrom’s Rosicrucian Society in England, mainly in the Adeptus Minor oath and the design made by Moina Mathers on the Second Order Membership Roll. So, Golden Dawn of course received some influences from the anglo-saxon esoteric tradition, because of its close proximity with that esoteric community. But these influences I consider to be of a minor significance. As I already have stated, the very foundation for the Second Order was received through Mathers’ continental sources. But it is an established fact that the First or Outer Order, at least in part, was founded on that mysterious Cypher Mss. which Westcott received from either Woodford’s or MacKenzie’s estates, a document which I also believe likely has a continental origin. 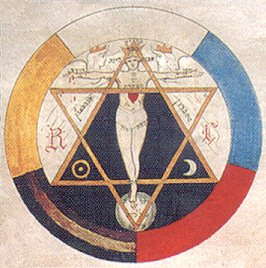 Seal on the membership roll of R.R. et A.C.

So I basically acknowledge the fact that the Hermetic tradition within the Golden Dawn has a continental origin, as shown through the Cypher Mss. and its initiation rituals, and the Second Order material. According to Jean-Pascal Ruggiu some of the rituals and wand designs of the Second Order actually derives from the German Gold- und Rosenkreutz Orden. Lately there has been developing an interest of the origins of the Qabalistic tradition of the Golden Dawn, which as it turns out has strong Sabbatian connections which probably derives from the Gold- und Rosenkreutz offshoot Asiatic Brethren or Brotherhood of St. John the Evangelist from Asia in Europe.

But it was actually Jacob Frank's version of Sabbatian Qabalah in Poland which found its way into the Asiatic Brethren during the 18th Century. Jacob Frank was regarded by his followers as the next avatar, the reincarnation of the Messiah Sabbatai Zevi of the 17th Century. One can easily see a development or lineage here from Isaac Luria, through Sabbatai Zevi (and Nathan of Gaza) to Jacob Frank. This lineage continues to this day through the Golden Dawn!

Now what can be said about the Qabalistic Schools of Sabbatai Zevi and Jacob Frank? Sabbatian Qabalah is very antinomian in its nature, i.e. it revolts against organized religion, especially amongst the teachings of Jacob Frank who regarded religion (as Hebrew, Christian and Islamic) as the Shells (Qlippoth) who entrapped God. It was the task of the Jewish Qabalist, according to Frank, to convert to Christianity (who he referred to as the sons of Esau; i.e. the Edomite Kings) and free God from its bounds, as they already had done with the Hebrew religion. Hence Frank's followers converted to Catholicism en masse. The cult of the Virgin Mary in Poland was also an important ingredient in Frank's teachings.

Sabbatai Zevi did the same with Islam when he was forced to convert to it in 1666, by the Turkish sultan, comparing it to the descent into the mouth of Samael (Satan). Later, Sabbatai Zevi created a following amongst the Turks, called the “Donmeh” (Turkish for “convert”), who seems to exist even today as a ethnic minority, although fully integrated with the Turkish population. Jacob Frank was in fact initiated into the Sabbatian Qabalah by the Turkish Donmeh, before he later entered his missionary life in Poland.

The Frankists, who had a large following in Poland and other eastern European countries, engaged in sexual practices. They embraced sin, not as “sinners” but as “saints” to free the sin (the spark of God from the Qlippotic Shell) through indulgence or integration. Obviously the Frankist Qabalah was highly controversial and it’s no surprise that it was branded by the Jews as heretic, and also later banned by the Catholic Church.

I have written on the subject of the Qabaljstic roots of the Golden Dawn elseware on by blog, which I recommend for further reading, the essays on the origins of the Qabalah of the Golden Dawn and the followup Frankist Qabalah. I further recommend reading the book on the subject by Gershom Scholem called Sabbatai Sevi - The Mystic Messiah, which deals with both Sabbathai Zevi and his successor Jacob Frank, and the antinomian nature of their teachings. One can read extracts from Scholem’s text here.

Actually, it was Gershom Scholem who first identified the Jewish freemasonic lodge of Frankfurt-am-Main called Lodge L'Aurore Naissante or “Chevrah Zerach Bequr Aur”, the latter name also in part found imprinted on the Cypher Mss. of Golden Dawn as the Hebrew name for “Order of the Golden Dawn”. It is a well known fact that prominent members of the Asiatic Brethren was involved in the creation of this Jewish lodge, and that it became the heir to the tradition of the Asiatic Brethren (and the Gold- und Rosenkreutz, from which the Asiatic Brethren emerged).

I personally concur with the theory proposed by some Golden Dawn scholars and researchers, that the tradition of the L'Aurore Naissante instigated the later Golden Dawn and was behind the contents found on its Cypher Mss. I believe the most plausible link and transmitter between Frankfurt-am-Main of 1807 and London of 1888 to be non other than Kenneth MacKenzie. It is more or less an established fact that the Cypher Mss. were written in MacKenzie’s handwriting. He was also one of the few men in England who was up for the job, in the same way as Mathers was the only man for the job of receiving the Second Order material from the continental Adept referred by him as Lux Ex Tenebris.

Be there as it may, but there obviously exist a strong connection between the Qabalah of Jacob Frank and the Golden Dawn. Reading the Sabbatian doctrine I have found many references to the diagrams of the Golden Dawn, most prominently in the Garden of Eden diagrams. As some of you already know I have written about my findings extensively on my blog, namely on the subjects of the left and right hand paths, the divine ambivalence, antinomianism and the middle pillar path, texts which all were written by me as a part of an ongoing discussion/dialogue with another Swedish Qabalist, Thomas Karlsson, a follower of the left hand path or "Klippothic Kabbalah".

In short, the truly unique aspect of Sabbatian Qabalah is that it acknowledges “evil” and “demonic” as equal parts of God as the “good” and “angelic”. It speaks of a “divine ambivalence” (as I call it) even on the level of Ain-Soph. Ain-Soph, according the Nathan of Gaza (who was the actual brain behind the Sabbatian doctrine), consisted of two kinds of light, the “thoughtful” and “thoughtless”. The former was in favour of creation, the latter tried to hinder it and conserve the original state of blissful “nothingness”. Personally I compare these original impulses with the “life” and “death” drives of Sigmund Freud, the latter manifesting as an atavistic drive of regression into the blissful state of the womb, the former the drive of individuation and progress into adulthood. These two conflicting divine intentions of the Macrocosm, as also reflected in the Microcosm, later followed creation and manifested the two Pillars of Qabalah, the black and white.

There actually exists a modern incarnation of the Sabbatian antinomian movement called “Donmeh West”, one of the few traditional Hebrew Qabalistic centres which can be of interest for Golden Dawn students. Its website contains much information on the Sabbatian and Frankist doctrine, blended with some Jungian depth psychology; highly interesting material indeed written by the antinomian Kabbalist, Reb Yakov Leib HaKohain. I really recommend reading his essays and also the yahoo group forum which he runs. I personally have learnt a lot by reading the teachings by HaKohain, remembering in the back of my head that it is a modern development of the Sabbatian current – the next natural step after Jacob Frank if you feel comfortable in the (un-) ortodox Hebrew tradition. But for a Christian-Rosicrucian Hermetic-Qabalist, the most natural step is of course the Golden Dawn.