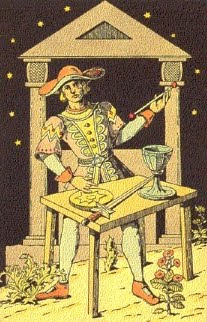 IN A RECENT discussion on the blogosphere someone suggested that we all have different interpretations or perspectives of how we perform our magical rituals within the Golden Dawn tradition, but in the final analysis we all harvest the same results with them. Now, is this a correct assumption or simply yet another truism? Well I do have an opinion on this matter, which will follow, but I am also interested in hearing yours.

I believe that our paradigm and emphasis – the interpretation – of what we do also shapes our magic, as well as it shapes our universe. This is largely in contrast with alchemy (that is of the operative material / energetic type, not the speculative or “spiritual”) which is an art-form that is the most scientific of all the hermetic “arts”. This means that alchemy is more of an objective science than it is a subjective art; if you perform certain processes, objective results will follow which is more independent from your own understanding of them. But you have to know the correct processes to reap the harvest.

But the thing is, even if you had some fancy idea with what you would expect from an alchemical processing, that wouldn’t change the outcome if you persevered in your technique. Alchemy doesn’t care about your belief system. It doesn’t even care about your morals or spiritual 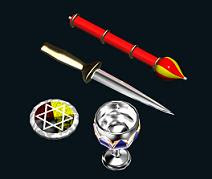 attainment. It will still produce the pre-supposed results if you persevere. There is this aspect of magic as well, but not at all to the same extent as with alchemy. Thus magic is more of an art than it is a science. If you are to succeed with magic, you have to have gained a certain understanding of what you are supposed to do, and the spiritual (and moral) attainment that follows with it.

Thus with magic, things are a lot more subjective and belongs to the powers of the mind, that is will and imagination, to a greater extent. If alchemy is more of a material and etheric / energetic science, magic is more of an etheric / energetic and astral art, while contemplation and meditation belongs to the mental and spiritual realms. Of course, according to occult law, a higher plane always affects a lower; what I am talking about here is upon which plane certain practices operates on a causal level. An operation has greater effect on that plane in which it also has its causual affinity; thus alchemy, which operates mainly on the etheric / energetic and material planes, is the most effective means to transmute your body. In the same manner, magic, which operates mainly on the astral, is the most effective means you have to transmute your personality and the powers of the mind, etc.

It also works the other way around; there is a repriprocity going on here. Thus your alchemy will be affected by the condition of your body, or how your body works; that’s why diet, physical exercise and hygiene is important in alchemy. Hatha Yoga is an Oriental tradition that examplifies this, as it involves all of these component parts in relation to bodily manipulation. And even more so, magic will become affected by the conditioning of your thinking and feeling, by your particular though forms and projections; that’s why right attitude, virtuous conduct and mental hygiene is crucial for the successful outcome of magical operations.

Thus when it comes to magic – the realm of the astral and etheric – a certain perspective or outlook will affect your imagination, thus resulting in different effects of ritual, or at least altered states. That’s what I meant in a previous essay when I said that although me as a traditionalist share a ritual in common with a reconstructionist, and perform it outwardly almost exactly in the same manner as a “reconstructionist” would do it, we will still reap different results because we see them with different lenses.

Now, don’t misunderstand me here. There are of course objective results in magic too; someone entirely ignorant of what he is doing with a rite, with no expectations at all, will still harvest something – a neutral or objective state. We do perform our rituals in a certain way for a reason; the geometrics, proportions, colours, movements and signs are there for a set purpose. Rituals are performed in the body and physical space-time continuum and thus affect objective physical / etheric results as well. But our mind constantly feedbacks with its interpretations and consequently also alters the objective results. This means that perhaps on a Neophyte level the

effects are more or less the same between practitioners, if performed properly, and also quite limited, but that amongst Adepts you will see quite different effects and also more profound results.

Then there is the question if there is a “right” way to perform a ritual or a “wrong” one, if we all agree upon the premise that our outlook changes the effect. Yes, I believe there are certain optimal ways to view or understand our common rituals. I have had the benefit of sharing my magic with many initiates, and tutoring several students, for the last two decades. There certainly are effects to be expected that are shared between us. But if we suddenly change our perspective, out of different reasons, that goes contrary with the statistically significant results between a number of initiates and a traditional understanding, what will happen then? Suppose you read a book or some text on internet which interprets a ritual for you in a convincing way that changes your outlook upon it, even though your previous outlook is shared with the experience of several others, won’t that change its effects which goes contrary to its nature? Yes, I believe it will.

Thus, the best way to learn ritual magic is not to have any preconceived opinions about it, beyond some very basic ideas so that you know what to use a certain ritual for. As with alchemy, there should be certain signs to expect from continuous performance of ritual that the tutor will use to check if the student is progressing with his work. As an Adept, his imagination and willpower being developed into near perfection, the effects of ritual will be greatly enhanced. And if they are harmonious with the basic nature of that ritual and in agreement with tradition the enhancement effect will be even greater. Thus the right attitude in magic is crucial.

So my suggestion to anyone working with the Golden Dawn system of magic, with only the published material as a guide, is to shun any analyses of rituals, even my own. I know that the temptation to search for “facts” is great in this post-modern age of information, especially in the initial stages of the work, but unfortunately there are to many strange notions floating around and especially on the internet. Most true teachers of the system are not writing publicly. And those that are only writes about general topics and only very scarce or non at all about specifics.

Just work with the system, learning the theory from the official documents as published by Israel Regardie, and observe what is happening. Take careful notes from the results that follow. Don’t share them with anyone, especially not on the internet. Stay away from blog-journals and do not consider writing your own, especially if you are a beginner in the practice. Remember that your own insights can become a stumbling block for another practitioner. See what experiences and opinions that sticks around after a few years. Chances are greater that they reflect the true nature of that ritual or magical formula.