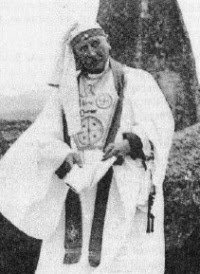 I WOULD like to share some historical tidbits with the gentle reader, as today Pat Zalewski, doing yet another round of “lineage debunking” over at the Watcher of the Dawn anonymous hate blog, inadvertitly succeeded in giving yet some more credence to the “druid track” of the G∴D∴ / A∴O∴.  In response to my previous blog Is there even such a thing as a Golden Dawn linege?, he wrote the following:

What we do know is that Reid’s secretary was a former 5=6 GD member and once or twice there were some GD rituals performed at Druidic celebratory times of the year. These were short lived.

Now, isn’t it highly interesting to know that the personal secretary of G. W. MacGregor Reid (the guy in the picture) was in fact a former 5°=6° of the G∴D∴! And that Mr. Zalewski furthermore confirms that there in fact were G∴D∴ rituals being performed in a druidic context! I personally wasn’t aware of the historical curiosity that the secretary of Reid being a former Golden Dawn Adept. My gratitude goes out to Mr. Zalewski!

Well to me this fact isn’t particularly strange considering the claim made of MacGregor Reid being a 7°=4° regularly advanced by S.L. MacGregor Mathers. His personal secretary being a 5°=6° gives more credence to the original claim; it only comes naturally to select a fellow Frater of the Tradition. That Golden Dawn rituals were performed together with druidry were no news to me personally, neither to my gentle reader.

The possibility of Nauda temple was brought up in the Sword of Wisdom as having a noted British Politician involved. His biographer who went over all his papers found no reference to it.

Not that strange actually considering that Nauda was a secret Temple, as it was working under the aegis of the G∴D∴ / A∴O∴. Strange however why this obvious detail didnt come across Mr. Zalewskis mind.

What this all comes down to is that Tomas claims he was told this twaddle and he has taken it as gospel without doing any independent research to check it out.

Actually, over the years and also quite recently, I have had very interesting and highly trustworthy people, renowned historians with strong links to both the British and Pacific occult scene, contacting me and lamenting the way in which Bourke has been portraited by Mr. Zalewski, vindicating his well deserved status in the British islands as a key occult player, as well as the druidic element in later G∴D∴ / A∴O∴ history. These individuals have preferred to share information with me in strictest confidentially, which is why I cannot reveal their identities nor any detailed information regarding their sources or presented facts. Let’s say that it is more to this story than some individuals, such as Mr. Zalewski, wants my gentle reader to believe. I am quite confident that the information that I have presented represents the facts.

However, in my previous blog essay I also stated that facts regarding lineage can be a bit sketchy and if any new information comes to light that actually makes some of what I have stated outdated, I will be happy to make due changes to my future presentation. Leonard Stevens aka Jean de Cabalis, provided such information today, which I will present here and that I find plausible:

The Adeptus Maximus of Madeline Montalban is “nothing like”, nor being equivalent to the Golden Dawn 7=4 grade. Madeline Montalban correspondence course had a 22 degree grade system based upon the Tarot which during the course, various titles/grades were honoured. 0-0 being neophyte, 0-1 the Magician, 0-2 High Priestess. Montalban also refers to most persons doing the correspondence course will get as far as completing the ‘Adeptus Miniums’ [sic.] grade of the OMS.

Desmond Bourke may of completed the entire 22 degree OMS correspondence course and got awarded the Adeptus Maximus grade, but the grades of the OMS are not grades in the meaning of Golden Dawn initiatory grades and cannot be compared. It is like comparing apples with oranges.

To be honest, I have felt somewhat reluctant to believe in any connection between Motalban’s Morning Star and that of Felkin’s Stella Matutina. Now, Mr. Stevens has convinced me that any such connection, although possible, is highly unlikely. It probably stems from a misunderstanding of Motalban’s system, which Mr. Stevens has now cleared up, something that I am utterly grateful for. I have also made changes to the information accordingly on Gryendemorgonrodnaden.com and on my previous blog post.

Now, in closing, Mr. Zalewski is welcome to comment on the Gyllene Gryningen blog directly, instead of using a highly suspectible proxy such as Watcher. We already know that he is an ardent follower of the Gyllene Gryningen blog and even takes the effort of translating my Swedish into garbled English, which is more than I expect from most of my English readers. Thank you.

One of the distinguished historians on occult history which I mentioned above who supports my view on the druidic element of the G∴D∴ / A∴O∴, and who still wishes to remain anonymous considering the current inflammatory state of the Golden Dawn Community in handling controversal truths, provided me with some highly interesting information in response to this blog post. He authorized me to use this information, for the benefit of my gentle reader, and I will paraphrase him accordingly.

According to him the Cromlech Temple of the Sun Order held druidic festival rituals at Beltane, and also Circle rituals (which I surmise is a reference to Stonehenge), the senior Officer of both these occurances holding the title of “The Arch Druid”. Both the Beltane and Circle rituals had existed from the late 1890s, this informant states, and the fact remains that S.L. MacGregor Mathers was a member of the Sun Order. As the Archon Basileus of the A∴O∴, there is no doubt that MacGregor Mathers would have officiated as the Arch Druid when he performed these rituals, and my reliable informant is convinced that he did perform them. Furthermore, it is his view that Ithell Coquhoun had picked up information from her initiated contacts, some of whom where conscious about the link back to Cromlech Temple and the Sun Order, which is evident from reading her Sword of Wisdom.

For me it is highly intersting as my own initiatory and esoteric transmittors affirmed to me that S. L. MacGregor Mathers and G. W. MacGregor Reid had swapped lineges between the An Uileach Druidh Braithreachas (“The Druid Universal Bond”) and the Rosicrucian Order of A∴O∴, somewhere in time when it shed its former name Hermetic Order of the G∴D∴, making the former a Arch Druid and the latter an Adeptus Exemptus. The Adeptus Exemptus pertains to the highest office of the A∴O∴, being the Chief Adept and Archon Basileus, in the same manner as the Arch Druid serves as the Chief Office of the Druidic Mysteries.