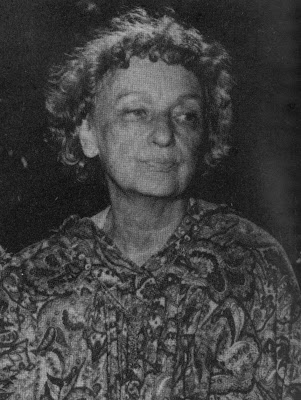 Ithell Colquhoun (1906-1988) is best known today for being a painter and author of great prominence on the British surrealist scene. She studied at the Slade School of Art in London and soon also studied the arts in France, and there met the master Salvador Dalí which made a great impact on her artistic expression. She made her debut at a exhibition in 1936 and by then already had developed her style which she herself described as "magic realism", showing strong influences of Dalí. One such example is provided below (Scylla from1938).

From 1939 and onwards Ithell often used a technique which can best be described as "automatic painting", i.e. the artistic equivalent of automatic writing, not uncommon amongst surrealist painters such as her mentor Salvador Dalí. It was also used amongst certain symbolist painters and writers, such as the Golden Dawn Adept William Butler Yeats. This is also a

technique which naturally can be found in some occult circles, which leads us to Ithell's connections with the occult community, in which she was known as Soror Splendidior Vitro (see monogram at far right for this magical motto). Ithell in fact took part in the movement today commonly known as the Golden Dawn. There she used her artistic abilities in full bloom to express its occult worldview, especially connected to the Qabalistic glyph of the Tree of Life.

In the Golden Dawn community Ithell is best known to us for her seminal work and personal interpretation of the history of the Golden Dawn, called The Sword of Wisdom: MacGregor Mathers and the Golden Dawn. This book, which basically is a biography on S.L. MacGregor Mathers, was published by Spearman in 1975 and is currently out of print. Compared to the more academically rigid and hence dispassionate works of authors like Ellic Howe and R.A. Gilbert, the work of Ithell Colquhoun is written with love and passion for the tradition and from the perspective of an initiate. This makes the work the more interesting as it draws from many sources not strictly speaking legitimate from the academic angle, such as word of mouth traditions and gossip amongst initiates, etc.

Ithell also wrote one more occult work, the hermetic-surrealist novel Goose of Hermogenes, published by Peter Owen in 1961. This work was probably developed under the influence of automatic writing, or so Steve Nichols asserts us, and can be best regarded as a modern oracle. In short Ithell's heroine finds out, while visiting her uncle at his island that exists out of time and space, that he actually is in search of the philosopher’s stone. Goose of Hermogenes can best be described as an esoteric fantasy novel which draws from scenes and imagery mostly derived from medieval occult sources. Each chapter title is also correlated to different stages in the alchemical work. It is a reading worth while for any student of the Golden Dawn or of Hermeticism.

The official history according to The Sword of Wisdom informs us that Ithell Colquhoun applied for initiation into the Golden Dawn in the 1930's but was rejected, and as a consequence instead later joined the O.T.O. in 1952 and Kenneth Grant's Nu Isis Lodge in 1955. The truth of the matter is however that while it is correct that Ithell later became a member of the O.T.O. she prior to this in fact eventually were initated into the Rosicrucian Order of the Alpha et Omega (the legitimate heir to the G∴D∴), though she never reached beyond the 2°=9° Grade of Theoricus. Why she didn't attain any higher Grade is yet a mystery to be solved, but one probable reason is because of the closure of the Temple in the 1940's in the wake of Israel Regardie's publications of the Stella Matutina materials included in his The Golden Dawn. It is also a well established fact that her cousin Edward John Langford Garstin (1893-1955) was a prominent and senior Adept of the A∴O∴, and personally supervised and tutored Ithell well above the material contained in her Grade. She often made drawings and paintings of the teachings contained within the R.R. et A.C. (or Inner Order of the A∴O∴).

Ithell also became a prominent member of Countess Tamara Bourkoun's Order of the Pyramid and the Sphinx (O.P+S.), after its founding in 1963, together with other Adepts like Marquis Nicholas Tereschenko (1920-2001), the latter which later in 1992 would resurrect the old MacGregor Mathers Paris Temple of Ahathôôr No. 7, together with his student Jean-Pascal Ruggiu (who also was a member of the O.P+S.). Some sources claims that O.P+S. received a valid lineage from the A∴O∴ through Miss Tranchell-Hayes, the last Imperatrix of the A∴O∴

From 1964 and through to the 1970's Ithell was a dedicated Adept and teacher of the Inner Order of the O.P+S., called the Ancient Order of the Phoenix. The fact is that Bourkoun needed Ithell Colquhoun's assistance, as Ithell was one of the very few Adepts left initiated into the oral traditions of the A∴O∴, in comparison with Israel Regardie which had provided Bourkoun with her training in the United States prior to her arrival to England in 1963. Unfortunately Ithell's supervised A∴O∴ training wasn't completed as her cousin Langford Garstin, according to initiated sources, suddenly withdrawed all his support and tutorship of her. The reasons for this sudden change of heart is unknown, but perhaps it could have had something to do with the fact that Ithell was in communication with both Tamara Bourkoun and Israel Regardie, well before the founding of O.P+S. And E. J. Langford Garstin's sentiments towards Israel Regardie, who by most initiates of the old school was considered to be an oath breaker and profaner, is a well documented fact.

Much of Ithell Colquhoun's lectures and writings for Bourkoun's O.P+S. has finally been published in 2007 by Steve Nichols in his The Magical Writings of Ithell Colquhoun. Nichols has also been kind enough to publish some of Ithells paintings and sketches, of which one of these - the occult meanings of the Hegemon's Lamen - is presented on the cover of his book. 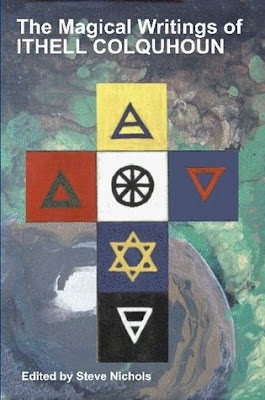 The dynamics of Ithell's style is obvious just by looking at this image; the main field of work of Ithell was the magical theories and uses of colour, one of my own fields of interests. Overall her occulted paint works, under Langford Garstin's supervision, is strikingly beautiful and powerful, ranging from dissections of the crosses of the Outer Order admission badges, to the Tarot and the Sephiroth of the Tree of Life, amongst other yet unpublished material. It is obvious that Ithell Colquhoun was a very creative and productive painter on both the surrealist and occult scenes.

But also her occult writings bears the mark of lucidity, which is evidenced by the lectures contained within The Magical Writings of Ithell Colquhoun. I really recommend any serious student of the Golden Dawn to purchase this book by Steve Nichols, and above all the electronic downloadable version as it contains colour diagrams and photographs which does justice to Colquhoun's works. Nichols also presents a erudite and interesting account of the life of Ithell Colquhoun and her involvement within the Golden Dawn (of which I have drawn somewhat to write this biography), even though it lacks some information which I have received from initiated sources and now provided here for your erudition.

A point of clarification on the OP+S. Tamara founded the Order following her arrival in London in 1963; she previously lived in the United States, where she had corresponded with Israel Regardie. The Order was however founded on her own Inner contacts rather than any lineage.
Langford Garstin died in 1955 and would not have been in a position to approve or not of his cousin's involvement with the OP+S, which commenced around 1964.
-G.N., London

Thank you for the note, which obviously addresses this original passage: "Unfortunately, when her cousin Langford Garstin were told about Ithell's activities within Tamara Bourkoun's organization, he withdrawed his support and tutorship of her. Obviously there were no consensus amongst the old Adepti of the A∴O∴ regarding the O.P+S."

I have made amendments accordingly and have taken the liberty to use the information that you have provided.