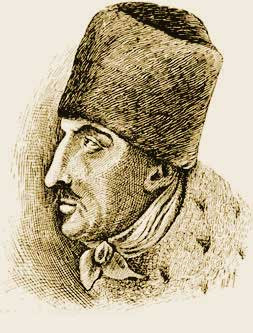 This is a followup on my previous essay on the origins of the Qabalah of the Golden Dawn, or rather my lengthy citations of the schoolary postings of Olen Rush. Yesterday on the International Golden Dawn Forum he made another higly illuminating post on the subject of the frankist Christian Qabalah, named after the founder Yakov Leib Frank (1726-91; see image above), which I feel deserves another highlight.
In his post Olen said that Shabtai Tzvi (1626-76) suddenly emerged in the wake of Polish persecution of Jews "and the majority of the House of Israel believed him to be the Messiah... then he converted to Islam... and joined the Bektashi Sufi Order. This caused a blending of Islamic Mysticism with the Kabbalah. This forced Conversion became Mythopoetically and Psychologically very Powerful to the Marrano Psyche and they found no objection to the Messiah as a Crypto-Jew. Later... an Avatar arose (the Yechidah Mosiach dwelt within him) his name was Yaqob Frank... he merged the sect with Mystical worship of 'The Virgin' of Czestochwa. The influence of Frank is seen in the Kabblah of the G∴D∴ as it stemmed from the 'Chevrah Zerach Bequr Aur' or 'Society of the Shining Light of Dawn' which was part of the Asiatic Brethren. Yaqob Frank's cousin was really the primary person of this Group. There is also the influence of Samuel Chayim Falk who was active in circles around Swedenborg, Cagliostro, and also is the source of the 'Kabbalistic College' occasionally mentioned in G∴D∴ histories. There was also a blending of Neoplatonic Philosophy with Kabbalah along with he use of Islamic Philosophers and the writings of Christian Kabbalists, in the systems of Abraham Cohen de Herrera and a few others whose writings are included in Rosenroth's 'Kabbala Denudata' a source text for the G∴D∴"

It is interesting to see how well the Polish Sabbatean Qabalah could blend with Catholicism and the worship of the Virgin Mary. Well it's no surprise actually, as the Frankist take on Qabalah is considered as a form of Christian Qabalah. But in this instance it is the Jew which embraces Christian mysticism, not the other way around like with Pico della Mirandola of the Italian school of Hermetic Qabalah. While the Sabbatean Qabalah finally blended with Islam, through the conversion of Shabtai Tzvi, Jacov Frank likewise encouraged his followers to embrace Christianity in its messianic mission, as it considered the religion of Christ as a intermediate stage towards a new form of messianic religion. It even considered Jerusalem as replaced with Poland for "the place of the Ascent". Hence its label as "heretic" in the eyes of contemporary Jewdome. As residents of Poland, it was only natural for them to embrace the peculiar cult of the Virgin Mary, which no doubt blended well with the Qabalistic view of sexual polarity.
o
"The Virgin" of Częstochowa is a reference to the painting called "The Black Madonna" which is held in the Polish castle and monnastary of Częstochowa. This image is a true icon of the Polish nation and people, and she is taken through several cities and villages on a yearly basis, were she is worshiped in a almost pagan fashion. In Poland the worship of the "Mother of God" is very prominent as she is said to have appeared in different places there, and effectively selecting the Poles as her "chosen people". 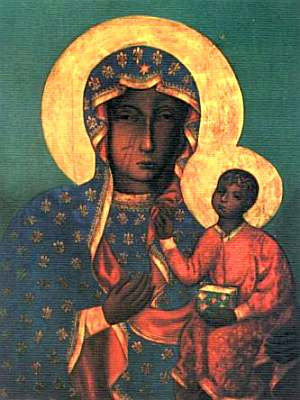 The Black Madonna
As a young child, with ancestry in Poland, I heard a story told by one of my Polish relatives which is quite faschinating, and says a lot of the beliefs held in the minds of common Polish people. During the war with Sweden in the 17th Century the Swedish Army under Karl X Gustav held a siege of castle Częstochowa. It is generally believed that a Swedish officer took his sword and stabbed the Black Madonna twice at her chin. The two scars are easily seen on the image. It is generally believed by Poles that the two wounds are wandering towards the throat. When they reach it the Apocalypse will be a fact, but this can only be prevented by prayer, a responsibility that is the lot of the Polish people.

The cult of the Black Madonna is a form of a worship of the Divine Feminine, and probably blended well within the Sabbatean/Frankist movement, which is renowned for its sexual mysticism. Yakov Frank was a devout worshiper of the Divine Feminine, which is easily discernable in one of his sayings: "In a dream in Częstochowa I saw the Goddess who came to me appearing as a beautiful virgin". No wonder then that Inner Alchemy - with its emphasis on the Venusian current - took a prominent place amongst the Asiatic Brethren. Its no surprise either that Frankist Qabalah was chosen to blend with Rosicrucianism, considering the Christian natures of both. And from this, if we are to believe Mr. Rush (and other scholars), finally emerged the Golden Dawn.
o
I cannot help to wonder if there are any traces left from the "new" messianic religion of Jacov Frank embedded within the philosophy of the Golden Dawn. Perhaps in the myth of Christian Rosenkreutz?