Angels in the New Age 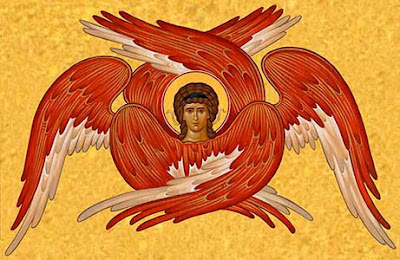 This is the first of a series of commentaries on the spiritual phenomenon commonly referred to as the “New Age” or neo-spirituality. I want to point out in the outset that I’m not particularly fond of some notions and tendencies expressed through this movement. Even though it bases some of its tenets upon the Ageless Wisdom of the occident and orient, it predominately presents it in a sadly diluted state. I often wonder if honest spirituality actually is the main issue in certain venues of the New Age or if it’s just another business market in the hands of charlatans who tries to exploit the gullibleness of desperate spiritual consumers. Hopefully it’s not, for the sake of spiritual seekers drawn into it, but nevertheless it’s important not to conflate the New Age with that of the Western Esoteric Tradition. So my ambition with these short comments is to point out the difference between the New Age and the true Ageless Wisdom of the Qabalah and Hermetics.

The first subject I want to bring your attention to is the use of Angels and Angelical communication in a New Age context and how this differs from the use of Angels in traditional esoteric lodges. What sparked this comment is an article I read today in a Swedish newspaper who described a “spiritual-angelical therapist” who held a lecture before an audience composed of social workers. These were told by the “therapist”, with outmost certainty common only to natural science, that angels belong to a vibrational level which greatly transcends that of humans, that spiritual guides resides in a vibrational frequency just below that of angels and that deceased human spirits belongs to the lowest frequency, bordering to ours. But these latter are good nevertheless.

First of all the naïve notion that spiritual forces are always good. No they are not, at least not according to occult philosophy. The Golden Dawn tradition teaches us that the astral realm is “the abode of the elementals, the Qlippoth, and the Shells of the Dead.” The “Qlippoth” is a Qabalistic term for “demons.” The “shells of the Dead” are also often negative energies that feed upon the living; not being the actual souls of the dead but rather energetic residues common in nature with though forms. Most occultists are also aware of the so-called “larvae”, primitive Qlippotic entities who feed upon the negative energies emanated from corresponding emotions and fantasies of humans. This fact is hardly ever addressed by New Age gurus, who always keep on only talking about some naïve notion regarding the “Light”, ignoring that there is also such a thing as a Universal Darkness and that “the Divine Darkness is the same as the Divine Glory.”

Secondly, I want to address the view of the nature and form of the angelical beings held in the minds of the New Age believers, who are often depicted and thought of in the same naïve manner as medieval theologians, i.e. as human forms with wings, although surrounded by a bright aura of intense light. Basically they are regarded to be humanoid light beings. Thus they never critically consider the fact that these are images which humans has projected coming from a collective mind feeded by iconography. In ancient times people likewise saw them as gods or demi-gods, in all kinds of human forms (and sometimes as beasts or man-beasts), sometimes with and sometimes without wings. There is no great difference with the common and naïve notion today regarding angels.

Contrary to this, initiates of all ages has known that these forms were and still are created by the human mind to be used as adequate symbolical representations of real principles behind what we call angels. Initiates often regard their true form to be abstract geometrical forms or pillars of light, not as winged humans, at least when dealing with the arch-angelic realm, although they imagine them as humanoid when performing magical acts. But this doesn’t differ from traditional god-form magic, as represented by the Golden Dawn tradition. In my opinion, magic may be defined as “applied mythology”. This means that the magician uses images as presented by mythology and religion to gain communication with their corresponding forces, never mistaking the concrete forms for the true essence of these forces or exalted principles.

Thirdly, in the New Age community one often use classical mediumistic formulae to gain communication with “angelical beings”, a vestige of 19th Century spiritualism. This means using passive forms of trance states where the conscious awareness of the individual gives way for the consciousness of the entity, which is allowed to possess the individual for a limited duration of time. This technique to bring about such as state of passivity is highly dangerous and is shunned by the esoteric lodges and their initiates for obvious reasons.

Remember what the Golden Dawn says regarding the Astral Plane as quoted above. Anything may enter the aura of the medium and take the guise of an angel or spirit guide. There is no safety filter or “fire wall” imbedded in this technique, which assures to only allow “angelical” forces to enter the aura. No true initiate ever surrenders to any entity in this way. Invocation is something entirely different to mediumistic communication. In invocation, the aura of the magician becomes filled with the force invoked, but consciousness always remains and the magical focus never sways. This is imperative to the success of a magical operation while keeping a sane and healthy mind.

Finally, the New Age seems to have lost track of the fundamental principle of the Microcosm in relation to the Macrocosm, used in Hermetic Magic and Alchemy. To me it seems that the New Age is limited to a Macrocosmic perspective in its outlook on Angels. Contrary to this limited perspective, the initiates see them both as being part of the Macrocosm (World) and the Microcosm (Man). That which is in the world is also reflected in Man, the “lesser universe”. Thus angelical beings, as well as all spiritual beings (including the Qlippoth), form the make up of a human being. Therefore Angels also represents spiritual archetypes of the superconscious, emissaries of the Higher and True Self.

This also concerns the notion of “guardian angels”. As the New Age sees them as mere evolved spiritual guides, sometimes as deceased relatives, external to the individual whom they guide, the initiate sees his Holy Guardian Angel as a symbolic representation of his own Higher Self or divine spark. I have written quite extensively about this in a previous essay, where I develope it more fully. Thus when a magician invokes a force he actually draws down higher and spiritual aspects of himself to his aura or energetic body. But this naturally doesn’t exclude the notion of external spiritual forces and entities being involved in the process as well – remember that in the final analysis the Microcosm is a reflection of the Macrocosm.

good post and some clear thinking on this very fashionable topic. The 'New Age' approach to Angels has always bothered me in its limitations and lack of adherence to traditional safeguards and wisdom. Really, the New Age Angels are not the Wisdom Tradition Angels, whatever they may be. In the same way, New Age Faery are not traditional Faery. Thanks :)

Very good post against uprising modern spirituality, which restricts spiritual reality to idol forms of "half human, half bird". I don't know if it's blame of New Age or simplified Christmas motives of winged-childrens, but very many people denies existance of spiritual beings only because they can't rationally admit possibility of existence of human with wings (from materialistic perspective).

"Wings" are always considered to be symbol of messenger of God, whilst symbol of "human" represents substantial similarity between human as primary spriritual being and higher beings or states of awareness- from Guardian Angel (Higher Self)to Seraphims and finally God himself. Even St. Augustin (collaborative of dogmatic angelogy) trated them primary as Spirits, considering the term of "Angelus" to be only their office- messenger of God. Therefore God can communicate with us through angels and we can do likewise.

That's correct that we don't have filters in the Sphere of Sensations (Aura, Spirit), otherwise we could't communicate with God, and without this communication we would be dead bodies (when Spirit goes away, body starts disintegrating into elements). We are being constantly posessed by different spiritual energies, entities etc. It's impossible to be otherwise, because our own Spirit is full-fledged component of this spiritual realm.

I find it enlightning what you said about clear mind during magickal processes. Truly, I consider that mind is the only one, highest level of our Soul, which is primarily part of God, not of theese lesser realms, which governs body by different spiritual entities through our Spirit.