The Gospels and the Golden Dawn 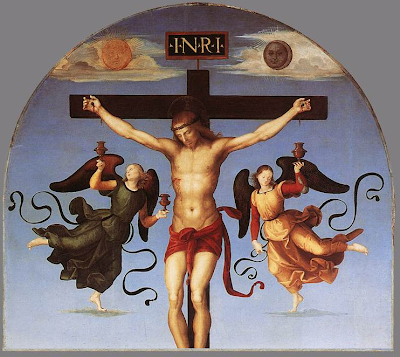 There is a quite peculiar discussion going on in certain quarters which has arisen in the wake of some recent published papers from the George Slater Collection, originally derived from the Ahatoor Temple No. 7 of the Rosicrucian Order of Alpha et Omega. In particular one such document has been questioned because of its apparently “exoteric” interpretation of the L.V.X. Signs of the 5°=6° Grade. The paper in question makes an analysis of each of the Signs of the Letters and is corresponding them to the Inner Order Grades of Adeptus Minor 5°=6°, Adeptus Major 6°=5°, and Adeptus Exemptus 7°=4°, in a way that very much corroborates my own thoughts on this matter. It basically places the initiatory process of the Inner Order in a Christian mythological context.
In this particual case references are being made to earlier papers of the Golden Dawn interpreting the L.V.X. Signs solely focusing upon the particular Egyptian god-forms associated with each Letter and Sign. As this later and “christianized” analysis doesn’t mention at all any Egyptian god-forms or make any astrological references, as in the old paper, this later work must be in error and an exoteric deviation, according to some individuals. People even start to ask questions if S.L. MacGregor Mathers had converted to Chatolisism in his later years. I ask in return: If he did, so what? Would that have narrowed his esoteric perspective? Not at all; in my personal opinion, the Chatolic Church is more mystic in its orientation than any Protestant Church. MacGregor Mathers was aware of this when he wrote:

We have a profound respect for Christianity, and are in no sense hostile to the Roman Catholic Church, nor yet to the other forms of Christian belief, provided that on the more Unitarian side they do not too far gravitate towards Atheism. And we especially consider the Roman Catholic Church has resolutely preserved in its Ceremonies the August Symbols of the Divine Wisdom.(Azoth magazine,1917)

In this strange discussion some individuals thus regards that something becomes exoteric or even “fundamentalistic” only because references are being made to a Holy Book, in this case the Gospels, while esoteric or “Gnostic” Christianity on the other hand is the usual Golden Dawn pagan interpretation using Egyptian deities and god-forms. I personally see this paper as a important contribution which presents yet another layer of the 5°=6° Grade which adds to the previous without taking away anything; this is typical of the Golden Dawn tradition to merge the pagan with the monotheistic pantheons.
Everyone with a little bit of “out of the Golden Dawn box” perspective upon the Tradition, who may see the broader context of the Hermetic teachings, knows that this perspective as expressed in the current discussion doesn’t have any real basis in tradition. There are lots of references to the Gospels in Esoteric Christianity, and Rosicrucianism in particular. I have already written quite extensively on this matter, but only want to point out the fact that mythos and symbology taken from the Gospels are quite common in alchemical works. Just take a look at the works of Fulcanelli and Roger Caro as two well known examples in placing the Great Work in a Christian mythological context. Thus this use of Christian symbolism in an esoteric context has a real basis in classical Hermetic alchemical texts.
Since the early days of mysticism and esotericism, and up until quite recently, it has been common practice to use sacred books, such as the Bible, as a reference tool in the path of the mystic or occultist. Qabalah is basically an esoteric interpretation of the Torah; the Sepher Zohar is regarded by some Qabalists as being an esoteric “Thalmud” or esoteric oral Torah, while the ordinary or common Thalmud is considered by Qabalists to be the exoteric counterpart. Sufism is largely based upon an esoteric interpretation of the Q’ran, and – alas – Historical Gnosticism uses a similar interpretation of the Gospels.
This notion of regarding any religious references in an analysis of a esoteric technique as being “exoteric” and reducing Gnosticism to the mere use of Egyptian pantheons, is a typical post-Crowley invention, with absolutely no basis at all in tradition. The amusing thing about this all is that I really doubt that Aleister Crowley himself would have objected toward this use of Gospels and Christian symbolism in this context, as he himself did it on occasions. Look for example in his The Book of Thoth and the interpretation of the Fool, or Key No. 0 of the Major Arcana. Crowley being a real initiate understood the subtleties in the use of religious imagery and the worth of myths, even Christian, in the interpretation of esoteric doctrines. He ought to as esotericism is a mystical interpretation of religion, daring to penetrate further deeper into its symbology and mythos than any official exoteric doctrines of the church. Why should the Golden Dawn be anything less?
S∴R∴
Upplagd av Sincerus Renatus... kl. 09:30

The higher degrees of OTO are all Christian...after a manner of speaking.