Paul Foster Case on the true nature of the Great Work 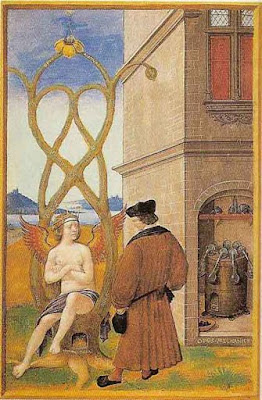 Reading some material of Paul Foster Case’s (the former Golden Dawn Adept), in his correspondence course written for the Builders of the Adytum (B.O.T.A.), I found this important passage that basically resumes in one paragraph the entire Great Work better than anyone else has been able to since it was written in the 1920’s. It is much to important not to be shared. Ora, lege, lege, lege, relege, labora et invenies!

The alchemical process is a physical process directed and controlled by mental means. It aims at a transformation of the human body. When this transformation is effected, the adept has a physical vehicle by means of which he is able to exercise unusual powers, among them being the ability to transmute metals. His own body is his laboratory and its organs are the "secret vessels" employed in the work of an alchemist. (My emphasis. From Introduction to Tarot, Lesson 10)

I’m starting to believe Paul Foster Case wasn’t lying when he claimed he was taught in the Royal Art by the Alchemical Master R. His words reveal insights which proves this to be highly plausible. In this context I suggest meditating on the attached image, originally painted in 1516 by Johan Perréal, while contemplating Case’s initiated words.

Being an initiate of the path of Internal Alchemy I now re-read Paul Foster Case’s lessons in an entirely different light that I did when I first received them in the middle 1990’s. I truly recommend the study of Case’s correspondence courses in the Outer Order as a preparation for the reception of the Hermetic Alchemical formulae. When I first read these lessons I had no clue what Alchemy was all about, but it obviously prepared me enough so that I could accept and assimilate the traditional teachings when I finally began to receive them orally and in an unvelied format.

The BOTA course is a good one.

It's not only good; it's brilliant! I would daresay that it provides the best written teachings on the Hermetic Qabalah available today.

i totally agree with you on Paul Foster Cases works. They are really the best written works on Tarot, Alchemy and Qabbalah i have ever read. Thanks for this post.