On Blogtalk Radio: The History of Qabalah in the Golden Dawn 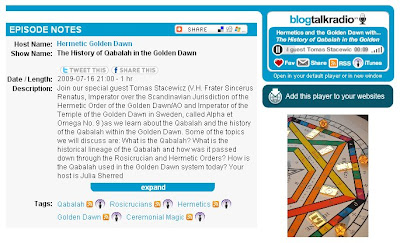 Yesterday evening I did my third guest appearance on Blogtalk Radio and the show called Hermetics and the Golden Dawn with David Griffin and Golden Dawn Adepts, hosted by Julia Sherred. In this last podcast of a series of three we briefly mentioned the two pillars of the Golden Dawn Tradition, Hermeticism (and Alchemy) on one hand and the Qabalah (and Theurgy or Magic) on the other and the common origin of them both. After a general definition of the Qabalah we then entered into detail to analyse both the “Christian Kabbalah” (which later became the Hermetic Qabalah) and the “Orthodox Jewish” Sabbateian Kabbalah. Regarding the former we mentioned Pico della Mirandola, Cornelius Agrippa, Athanasius Kircher, and Christian Knorr von Rosenroth as important personalities which constituted the Christian lineage into the Golden Dawn, and the latter regarding Isaac Luria, Sabbathai Zevi, Nathan of Gaza and Jacob Frank. Regarding the Frankist tradition (the successor to the Sabbateian Kabbalah) we also described how that lineage was transmitted into the Golden Dawn through the Rosicrucian organization known as the Asiatic Brethren and the important Masonic Lodge L'Aurore Naissante.
After that introductory presentation of the history of the Qabalah of the Golden Dawn we went on to talk about how Qabalah is used in the teaching system and inititiatory system of the Golden Dawn. A presentation of the Grades as relating to the Qabalistic Tree of Life was made in quite some detail. We also briefly touched upon the subject of Grimoires and especially the most noble of them all, i.e. The Book of the Sacred Magic of Abramelin the Mage as translated by S.L. MacGregor Mathers. In this context of the initiatic Grade system of the Golden Dawn the Abramelin operation was aligned to the initiatory process. Here an explanation was made regarding the peculiar assignment of numbers of the Grades. The analysis went into some detail about the three Grades of Adeptus Minor, Adeptus Major and Adeptus Exemptus, corresponding to the middle triad on the Tree of Life, and especially the important place that Demonic Evocation has in this level of the work. To better be able to follow this discussion of the Grades and the 10 Sephiroth of the Tree of Life I recommend making constant cross-references to the diagram of the Tree of Life, appended below. 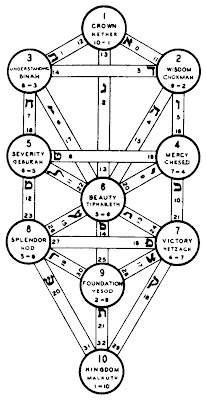 The Grades upon the Tree of Life
Together we also talked somewhat about the Tarot and how this symbol system was developed in the Qabalistic context, and how it is used in the Golden Dawn and especially how it fits into the glyph of the Tree of Life. An analysis was made about the different divisions of the Tarot, the Greater and Lesser Arcanas, the Four Suits, the four Honours of each suit, and of the 22 Keys or Trumphs of the Greater Arcana that corresponds to the 22 letters of the Hebrew alphabet. We also briefly covered the four Colour Scales of the Golden Dawn, corresponding to the four Suits, Elements and Honours, and how the so called King and Queen, or masculine and feminine Scales are especially used in Ceremonial Magic and implemented in the design of the Vault of the Adepti. We also spoke about the last two implements of the Adept which wasn’t covered in the previous podcasts, the Magical Sword and the Rose Cross Lamen. A comparison was made between the Air Dagger and the Magical Sword, and the use thereof, and also how the beautiful Rose Cross Lamen can be seen as a synthesis of the entire Hermetic and Qabalistic system of the Golden Dawn. 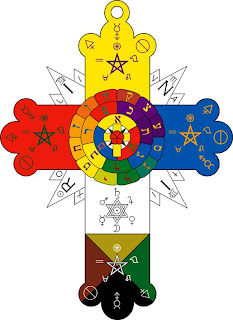 However, unfortunately some things have to be clarified further about what was said in the last podcast. When I talk about the “mythical” history of the Qabalah I don’t mean that it is not real. All I'm saying is that it is based on tradition, such as written and oral, and not on historical scientific evidence. Perhaps it would have been better to use the world “traditional history” instead of “mythical”.

Later when I mention that there exists not only one but several Trees (of Life) in the Qabalistic system, I mistakenly say “10” Trees. It is not wrong to say that there exists 10 Trees per se, but in that context I was meant to say FOUR, one each for the Four Elements, Suits of the Tarot and the Four Qabalistic Worlds (that of Atziluth, Briah, Yetzirah and Assiah). Then in each of these Worlds one can further divide each Sephiroth into yet another Tree of Life, making a sum total of 400 Trees.

When I talk about the origins of the Tarot I mention that there are two mains views, one of them as proposed by Paul Foster Case that it was invented by Hermetic Qabalists and the other (as proposed by people like S.L. MacGregor Mathers and Aleister Crowley) that it has an Egyptian origin, referred to as “The Book of Thoth”. Here I mistakenly say “Qabalah” instead of “Tarot”. I of course am referring to the Tarot and nothing else.

Unfortunately I make some other blunders in the podcast, such as corresponding the Sephirah of Geburah with the Adeptus Minor Grade instead of that of the Adeptus Major, and Chokmah instead of Binah with the 3rd Sephira, but I spot my mistakes after a while and correct them in the podcast. I suppose these obvious errors, which should easily have been spotted even by a Neophyte of the Golden Dawn, may be attributed to the fact that I don’t speak English and therefore have to focus much on expressing myself intelligible. Hopefully I haven’t created to much of a mess of this quite complex topic and that some of you have been benefited from the podcast. Please accept my apologies if my mission has failed.

For what it's worth, here is the link.

Even though I regard this podcast as the last of a series, this doesn’t necessarily mean that it is the last one that I will make together with Julia Sherred. I have really enjoyed working with her and she has made my task very easy with her adequate and intelligent questions, and also in the way that she has helped me (and the listeners) to make my points more lucid despite of my badly spoken English. So, hopefully there will be more podcasts in the future. I have to consult with Julia about future topics as I have ran out of suggestions myself. Or even better, if you have any suggestions about future topics which you want me to elucidate, please write here on this blog or to me personally on the e-mail link on the sidebar, alternatively to Julia Sherred directly.
S∴R∴
Upplagd av Sincerus Renatus... kl. 09:33