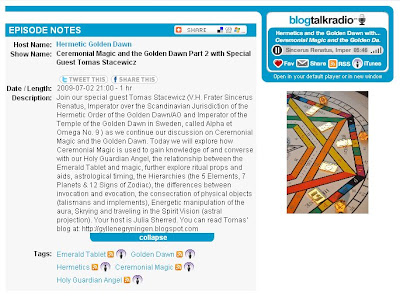 Yesterday evening I did my second guest appearance on Blogtalk Radio and the show called Hermetics and the Golden Dawn with David Griffin and Golden Dawn Adepts, hosted by Julia Sherred. We did a follow-up on the previous podcast on Ceremonial Magic and the Golden Dawn. In this present podcast we managed to cover most of the topics that was left out in the previous, such as some more information about the three Wands used in the Golden Dawn, the Elemental Winged Globe Wand, the Planetary Phoenix Wand and the Zodiacal Lotus Wand, the method of consecrating one’s tools and of talismans, and how all of that relates to the training of the Magician in the Hermetic Order of the Golden Dawn.

We also discussed the three major hierarchies of Ceremonial Magic, the Five Elements, the Seven Planets and the 12 Signs of the Zodiac, and how all of that is integrated in the curriculum of the Outer Order of the Golden Dawn, and also how the three hierarchies effects the initiate. Together we also covered energetic manipulation of the aura, i.e. how ritual invocation activates different forces and symbols into the aura. We also had an discussion about the initiatic process through the Elemental Grades of the Outer Order, and the necessary painstaking tests and tribulations the initiate has to face and learn to deal with, and how students are supervised and protected when being members of the Hermetic Order of the Golden Dawn, to be able to persevere through the dark and daunting phases of the initiatory process.

Some other topics being discussed were the importance of the relationship between the student and the teacher (tutor), and the analogy between psychotherapy and initiation. Moreover, we also covered the topic of divination, such as geomancy, astrology and the Tarot, and also the significance of ritual timing using horoscopes. We also made comparisons between Theurgy and the work of consecration in relation to synchronization.

The definitions and differences between invocation and evocation were also discussed in more detail compared to the previous show, and hopefully were more fully clarified. Hopefully we also clarified the subject of the Holy Guardian Angel and the Knowledge and Conversation thereof, and how the initiatory process of the Outer Order is a preparation for this primary spiritual goal. We also covered the Emerald Tablet in relation to Ceremonial Magic and its significance of the Hermetic view upon the relation between the macrocosm and the microcosm, and again how this relates to the aura, or energetic body. The subject of “Skrying and Travelling in the Spirit Vision”, of astral projection were also covered, and how that particular technique is used in Ceremonial Magic.

I personally was quite satisfied with the result and believe we covered most of the subjects I wanted to bring in to the discussion, and whatever were left out I believe we will be able to cover in the upcoming program about Qabalah and the Golden Dawn scheduled for next week.

Here is the link. Hope you enjoy it and will benefit from it.

Errors: Listening to the podcast again I noticed that I mistakenly attributed sickness to the Element of Earth . It should of course be the Element of Air and nothing else.

I also for some mysterious reason attributed the four lowest Sephiroth of the Tree of Life only to the Earth Element, when they are supposed to be attributed to the Four Elements of Earth, Air, Water, and Fire, corresponding to the Elemental Grades from Juniorus (or Zelator) to Philosophus respectively.

Perhaps all these Freudian slips into the Earth Element had someting to do with the fact that I did an Earth Invocation the same day, just some hours previous to the show.