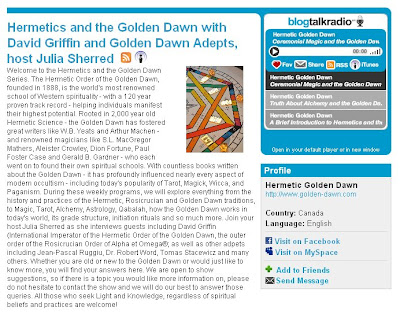 Yesterday evening I did my first guest appearance on Blogtalk Radio and the show called Hermetics and the Golden Dawn with David Griffin and Golden Dawn Adepts, hosted by Julia Sherred. The subject for the evening was Ceremonial Magic and the Golden Dawn. We covered lots of topics, such as the definition of Magic, the importance of Will and Imagination in magic in general, and ritual as an aid of the former to focus one’s mind, and the purpose of Magic in the context of the Golden Dawn. Together we also covered diverse topics as the comparison between Ceremonial Magic and other forms of Ritual Magic, between High Magic (or Theurgy) and Low Magic, the confusing definitions circling around regarding the Left and Right Hand Paths, the tools of the trade, banishings and invocations, and also somewhat about demonic evocation and integration of the darker sides of the Magician, and so forth.

I personally was satisfied with the result, considering the time limit of one hour, and the fact that there were some people asking some adequate questions which I gladly answered. Hopefully some of the misconceptions about the particular style of Ceremonial Magic in the Golden Dawn context were cleared up.

However I felt that one hour was way to short of time properly dealing with this huge topic. I would liked to have talked more about such topics as the “Knowledge and Conversation with the Holy Guardian Angel”, i.e. The Higher Self or True Will, the relation between the Microcosm & the Macrocosm, The Emerald Tablet in relation to Magic, the Law of Correspondences, Astrology and ritual timing, something more about Ritual props and symbols used in Magic (as that wasn't covered adequately or only on a basic level), also some more about the nature of the Hierarchies (i.e. the 5 Elements, 7 Planets & 12 Signs of Zodiac) and its use and purpose in spiritual evolution with the aid of Ceremonial Magic, something more about the method of Invocation (of angels & spiritual entities) & evocation (summoning of demons), and difference between these two methods, perhaps something more about Consecreation of physical objects (implements & talismans), but also the important subject of Energetic manipulation of the aura, Skrying and travelling in the Spirit Vision (i.e. astral projection) and perhaps the subject of Divination. But hopefully we will cover some of these topics in the upcoming program about Qabalah and the Golden Dawn.

Until then, I hope you will enjoy the contents and what was covered in the present show. Here's the link. For me it was great fun, and I believe also for Julia. I definitely will do more shows together with her, so please stay tuned!
S∴R∴
Upplagd av Sincerus Renatus... kl. 11:07

V.H. Frater the show was great. It's really fantastic how brightly in contrast the Alpha et Omega shines in these new blogs and podcasts! We all know that 1 hour is not nearly enough... Thank you for your efforts. You and LES do us proud :)

Thank you for your kind and encouraging words. In all fairness, there some non A.O. blogs out there which are good as well.