Lord of the Fire of the World 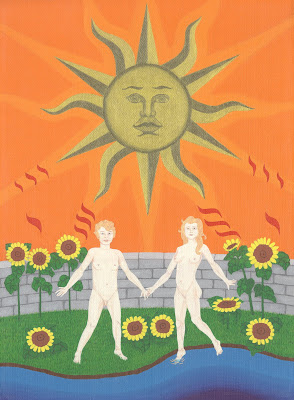 Furthermore, each of the 22 Keys or Trumps of the Arcana Major are used in the same manner as objects of Skrying or symbols for meditation with each of the 22 Paths connecting the 10 Sephiroth, as explained in the previous essay. The 22 Keys are used as prime symbols for this kind of working, as they contain the three main hierarchies used in Ceremonial Magic or Theurgy; the Elements, Planets and Signs of the Zodiac. They are traditionally attributed thus according to one of the Knowledge Lectures of the Golden Dawn: 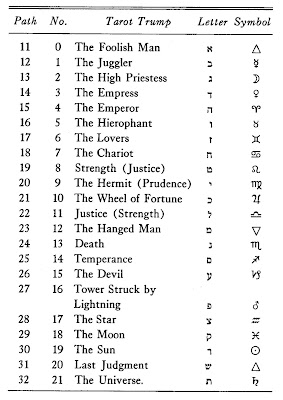 Attribution of the Tarot Trumps
Note that the last Path, that of Tau and The Universe, also traditionally is attributed to the Element of Earth, as well as the Hebrew letter Shin and The Last Judgement is to the Element of Spirit. Thus the Magician is able to use the entire series of the 22 Keys in any of the workings with the 5 Elements, 7 Planets and 12 Zodiacal Signs.

These esoteric attributions and correlations between the Hebrew Alphabeth, the 32 Paths of Wisdom, Thrumps and Forces (i.e. Elements, Planets and Signs) is in my opinion one of the most important revelations as put forth by the Golden Dawn. This tabellation was already contained in the famous and mysterious Cypher Mss. of the Golden Dawn, and hence wasn't the invention of either S.L. MacGregor Mathers nor W.W. Westcott. It is part of the very core of the Golden Dawn system, and therefore it was no strange matter when the original Order laid stronger emphasis on preserving it from profanation, as can be gathered from this part of the Practicus Ceremony dealing with these attributions:

...which has long been a secret among the Initiates and which should be carefully concealed from the outer world.

This secret was also firmly upholded by the initiates until Aleister Crowley decided to breach his sacred oath and reveal it through publication when his Liber 777 came out in 1909, and later in The Equinox. Hence it was the first secret of the Golden Dawn to be profaned. Since then these “estoteric” attributions has been one of the most videly spread and dissaminated teachings of the Golden Dawn.

As I already have explained in the previous essay on the Tarot Key of the Universe, the Outer Order initiate experiences the last half of the Major Arcana in reverse order. In the Grade of Theoricus 2°=9° (corresponding to Yesod) the candidate experiences the 21st Key of the Universe, as a symbolic representation of the 32nd Path of Tau. In the similar manner the candidate going through the Ceremony of Advancement into the Grade of Practicus 3°=8° (corresponding to Hod) experiences the 20th Key of Last Judgement pertaining to the 31st Path of Shin and the 19th Key of The Sun attributed to the 30th Path of Resh. The reader may now be able to figure out for him- or herself which Tarot Trumps are shown to the candidate in the Grade of Philosophus 4°=7° corresponding to Netzach and attributed to the 29th, 28th, and 27th Paths of Qoph, Tzaddi and Peh respectively, using the tabellation above. While going through the Ritual of the Portal of the Vault of the Adepti the Senior Philosophus is shown the Tarot Cards corresponding the the 26th, 25th, and 24th Paths of Ayin, Samekh, and Nun respectively. The rest of the 13 Keys are experienced in yet higher Grades beyond the Outer.

I would also like to point out that the mere painting of such a symbol as that of a Tarot Key is an exercise of meditation in its own right. At least that is my own experience in painting the Tarot images, which I accordingly did going through my own initiatory process.
o
The particular Tarot Key in question that I want to share with you now is a version of the Tarot Key commonly referred to as The Sun, visible at the top. When I painted it back in 1997 I did it to the fullest of my capacity and understanding of the Tarot. I was heavily inspired by Paul Foster Case's rendition of that Key, which is easily discernable in comparing it with the image below, which I coloured while a member of the B.O.T.A. previous to my attempt in painting a Golden Dawn version of that card. In retrospect I find it seriously flawed and hence I am able to publish it here on my blog as it doesn’t reveal anything substantial regarding the true designs of the Esoteric Tarot. However I have followed the traditional Colour Scales of the Golden Dawn in painting it, representing all four of them, i.e. the King, Queen, Prince and Princess Scales. 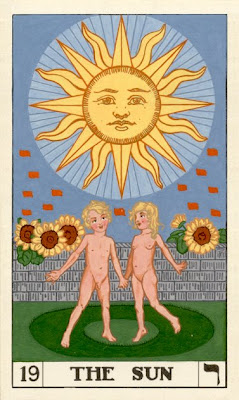 ©Tomas Stacewicz
This particular Key is numbered as XIX (19), and is the third encountered by the initiate in the Ritual of the 30th Path of the Practicus 3°=8° Ceremony. Its esoteric title is “Lord of the Fire of the World”, and it corresponds to the Hebrew letter Resh, and as such is an expression of the 30th Path of Wisdom according to Sepher Yetzirah, which reads:

[It] is called the Collecting Intelligence, and it is so called because from it astrologers deduce the judgement of the stars, and of the celestial signs, and the perfections of their science according to the rules of their revolutions.

This path, connecting the Sephiroth Yesod and Hod at the lowermost triad of the Tree of Life, is attributed to the Planet of Sol (the Sun), which is quite obvious just by looking at the card. The rest is self-explanatory by further attentive observation of the Key, but to aid the reader in his or her meditation I will quote the passage regarding this Key extracted from the Practicus Ceremony:

The Sun has 12 principal rays which represent the 12 signs of the Zodiac, they are alternatively waved and salient, as symbolizing the alternation of the masculine and feminine natures. These are again subdivided into 36 rays representing the 36 Decanates or sets of 10 degrees in the Zodiac, and these again into 72 typifying the 72 Quinaries or sets of 5 degrees and the 72 fold name SHEM HA-MEPHORASCH. Thus the Sun itself embraces the whole Creation in its rays. The 7 Hebrew Yods on each side falling through the air, refer to the Solar influence descending. The wall is the circle of the Zodiac and the stones are its various degrees and divisions. The two children standing respectively on Water and Earth, represent the generating influence of both brought into action by the rays of the Sun. They are the two Inferior or passive Elements, as the Sun and the Air above them are the Superior and Active Elements, of Fire and Air. Furthermore, these two children resemble the sign Gemini, which unites the Earthly sign of Taurus with the Watery sign of Cancer and this sign was by the Greeks and Romans referred to Apollo or the Sun.

The image above represents my third attempt into painting my own Tarot deck, not counting the colouring of the B.O.T.A. deck as part of my studies in that particular organization. According to my magical diary I started to do my preparations for the drawing of the Key on July 15, 1997, and finished painting it on August 23. It was painted on a panel of 24 x 33 cm in size, using Winsor & Newton acrylic colours as in the previously shown image.

the paintings are incredibly beautiful, thank you for sharing them! Up to now i have only coloured some black and white trumps for myself to aid me in my pathworkings and skryings, but you definitely inspire me to paint them all for myself again.

While seeing some of your paintings in previous articles on your blog, i have already wondered if you really drew them on your own. Wow!

In pathworkings i have found the tarot trumps as doors to the most power- and meaningful visions i ever had, even more powerful doors than certain elemental oder planetary enochian sigils.
And iam sure to draw them all on your own is one of the best guarantees for success in their astral exploration and for deeper understanding of their inherent occult principles.

Thank you for your kind words. Yes, Tarot is ideed a powerful magical tool, perhaps the most powerful of them all.