Lesser Ritual of the Malkuth Pentagram 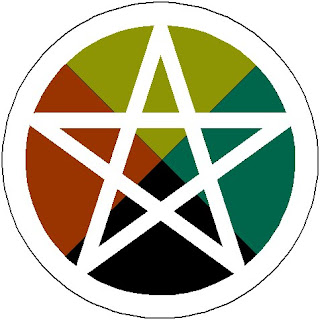 My previous take on the matter regarding the Elemental nature of the Lesser Ritual of the Pentagram (LRP) may be deduced from my earlier essay on this blog, but to summarize:

The Lesser Pentagram Ritual (and each Lesser Pentagram) invokes (or banishes) the Elements in synthesis, as Earth is the receptacle of the Primary Elements of Air, Fire and Water (a G∴D∴ philosophy echoing the Sepher Yetzirah and is aptly expounded upon in the 2°=9° and 4°=7° Grades). This makes the LRP more akin to Elemental Spirit rather than Elemental Earth. Therefore it has a general effect on forces more akin to the Elemental Realm and to Assiah as a whole. This means it is a particularly good general ritual for using with or against lower spiritual or astral beings; for the use of higher astral beings the Lesser Ritual of the Hexagram (LRH) is more useful.

While performing the SIRP one invokes all Five Elements but as separate entities which are united over the Altar and by the agency of the Tablet of Union. While performing the LIRP one invokes the Elements undifferentiated and as a synthesis in all four quarters. That’s the main difference. Thus it concerns the same forces but use different formulas.

Let us also, in this instance, listen to a well known and highly respected ex R.R. et A.C. Adept, Dion Fortune, and how she describes the Lesser Banishing Pentagram:

In dealing with Elemental or non-human entities the Pentagram or Penthalia, is the best weapon. This is a five-pointed star drawn in a particular way. (Pshychic Self-Defence, p. 189. My emphasis)

Notice that Fortune does say that the Pentagram (and the Lesser Pentagram) is the best weapon against Elementals. So she is clearly saying that the LRP is the most effective against the Elements, compared to any other ritual. She doesn’t recommend the Lesser Hexagram, probably because of its Planetary nature. So if the LRP is so good, according to her, to banish Elements, wouldn’t it be logical to say she supports it to invoke Elements as well? I believe she does.

The reason to bring the Lesser Ritual of the Hexagram (LRH) into a comparison with the LRP is because of the fact that all rituals in the G∴D∴ fits into a whole formula of ceremonial Magic. The LRP is a part of it, as is the LRH. They were both created within the same system of Magic to serve different purposes. If you know one, you may come to know the other in its light.

Now, the Lesser Pentagram is drawn to and from the Earth angle, but this doesn’t mean that by tracing it in this way one creates a diluted Earth Pentagram but, in my opinion, instead relates it to the said primary elementary nature of three becoming the four. It is also significative that it is drawn upon the Spirit and Earth axis, clearly affirming that Spirit is in Matter and Matter is Spirit, “as above, so below” etc., “Kether is in Malkuth”, and “Malkuth in Kehter”, etc. This is the reason for the white Hexagram symbol being inscribed inside the colours of Malkuth in the Earth Pentacle of the Golden Dawn. 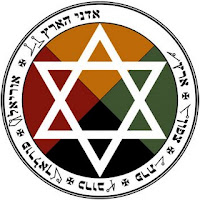 Earth Pentacle
So what we have here is perhaps more properly a Malkuth Pentagram rather than Elemental Pentagram. But then again Malkuth (which also corresponds to Assiah) is composed of the Four Elements - being the three primary Elements blending and creating the fourth while being received inside of it. So the Elements and Malkuth are synonymous concepts. But perhaps to avoid confusion one should call it a Malkuth Pentagram?

On the other hand Malkuth is often attributed to the Element of Earth and vice versa. This is particularily exemplified in the use of the four colours of Malkuth also for the Earth Element, as can be seen in the Earth Pentacle symbol shewn above. That’s another reason for the use of the “Earth Pentagram” in the LRP.

Also while Paul Foster Case did attribute the LRP to the Earth Element per se, in a unpublished B.O.T.A. document belonging to the Zelator Grade, perhaps he actually were referring to Earth as relating to Malkuth? As he doesn’t make this connection in the B.O.T.A. Zelator document referring to the LRP all we can do is to speculate in this matter. But Case being conscious of the connection between the Earth Elemental and Malkuthian symbolism may have made this attribution implicitly in relation to the LRP. At least, it seems plausible to me.

One may also argue that Malkuth is composed of other forces than the Elements, but this is a misconception in my opinion. True, there are also the Planets, or rather the Metals. But on the level of Malkuth the Planets (or Metals) are composed of different proportions of the Elements. This is also expressed through the formula of the three Alchemical Principles of Mercury, Sulphur and Salt, which expressed the Yetziratic primary Elements of Air, Fire and Water respectively. Perhaps this detail explains why the Hexagrams of the LRH also are attributed to the Elements?
S∴R∴
Upplagd av Sincerus Renatus... kl. 14:37