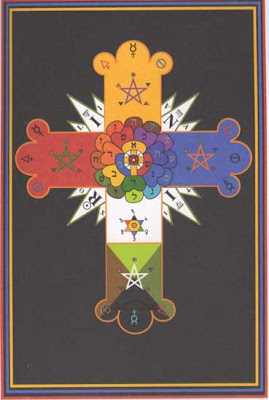 The Golden Dawn uses a total of four sets of separate scales of colours, and each of these are named after the court cards of the Golden Dawn Tarot, namely the:
Now each of these colour scales are divided according to the 32 Paths of Wisdom of the Qabalah. This is a reference to the Tree of Life, which is divided into 10 Sephiroth and the 22 Paths (corresponding the 22 Hebrew letters) that connect these Sephiroth, thus making 32 in total. In most situations of the practical application of the Golden Dawn system of attributions the Adept only uses the King and Queen Scales, with the exception of the Tarot which uses all four in the colouring of the Cards. But in most cases of theurgical practice the Magician uses the King Scale for the three hierarchies of 5 Elements, 7 Planets and 12 Signs of the Zodiac. In the work with the 10 Sephiroth the Adept instead uses the Queen Scale. This means that the Adept uses the first 10 Paths of the Queen Scale and the last 22 of the King Scale. This produces a particular version of the Tree of Life which is traditionally called the Minutum Mundum. 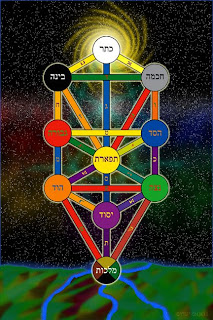 The Minutum Mundum
Each of the four Colour Scales differs in its composition but follows a very specific pattern of generation, which is to difficult to enter into here but is explained in full in the document called Ritual “W” – Hodos Chamelionis or “the Path of the Chamelion”. Briefly to produce the Prince Scale one unites the King with his Queen to produce the offspring. In the same manner the Princess Scale is generated from the previous three.

There exist a method in the Golden Dawn to divide the last 22 Paths of the King Scale (of the Minutum Mundum) into three separate and concentric colour wheels, which divides into 3, 7 and 12, together creating a rose thus: 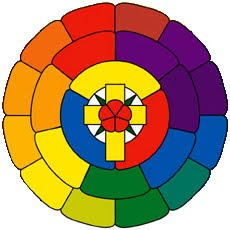 Now, one well respected Adept of the Golden Dawn community has recently suggested that to produce these last 22 Paths of the King Scale one must use different shades or hues of the same colour between each colour wheel as not to confuse different forces. As an example the Element of Water, the Planet of Luna (or Moon) and the Zodiacal Sign of Sagittarius are said to use the same colour according to the Hodos Chamelionis, i.e. the colour blue. To follow this reasoning as suggested by this Adept one must use different shades of the colour blue, and furthermore if the Hodos Chamelionis specifies the same shade there obviously must be an error.

Now in my opinion the only thing in error here is the reasoning of this Adept. Personally I prefer to follow the recommendations of the well renowned and former Golden Dawn Adept Paul Foster Case, who in the early twenties ventured into creating his own occult school in America based on the teachings of the Golden Dawn tradition. He mainly focused his teachings around the philosophy of the Tarot and colour, and of the Hermetic Qabalah behind these. According to him there was no difference at all between the colours of the prism, regardless of to which colour wheel and hierarchy they belonged. So according to Case, the bluish hues of Water, the Moon, and of Sagittarius, should be exactly the same or identical. And so on with the other similar forces.

In the old Golden Dawn document called Ritual “E” – The Rose Cross, in a note by S.L. MacGregor Mathers we are told the following regarding the application to colour:

The colours must be correct and clear and brilliant. If they are not the symbol is useless either as a Symbol or insignium. Actually evil effects may follow if the colours are not clear and brilliant or if they are dirty. If this occurs, the whole should be destroyed, for faulty colours and shapes in Divine Symbols are a degradation of Divine Things and are practical blasphemy, because it is substituting the evil and disorderly for the good.

In this document (Ritual “E”) no distinction is made between the same generic colours of each concentric series of rose petals. This clearly shows that the original intention of the use of colours corroborates the one made by Paul Foser Case (who belonged to the American branch of the Rosicrucian Order of the Alpha et Omega in the early 1920’s and thus was initiated into the original inauguration of the Golden Dawn, six decades prior to the Adept in question).

In my opinion, in the practical application of the four Colour Scales of the Hodos Chamelionis, one should use the generic colours of the colour spectrum – the colours of the rainbow – as these, in my humble opinion, uses the vibratory pitch most optimal for magical and alchemical use.

To generate some of the twelve colours of the Zodiac one simply use a shade which is somewhere between the two closest of the colours of the prism. As an example, to create red-orange one blends red with orange, and to create greenish yellow one blends yellow with green. But as with all generic colours, one in my opinion should use the three primary colours to create even these twelve. Thus to create red-orange one uses a blend of primary Red and primary Yellow, with an emphasis on Red, and to create the greenish yellow hue one uses a blend of the primaries Yellow and Blue with an emphasis on Yellow, and so forth with the other three “blended” colours of the Zodiac.

So in the final analysis, for most optimal magical and psychological performance of theurgy and meditation, with a few exceptions, I recommend the use of the three primaries of Yellow, Red and Blue for the generation of the colours of the King Scale, and also of the other three Colour Scales. Furthermore one should use the colour hues closest to the seven colours of the Prism, as much as possible, with the exception of blended colours as with some of the Signs of the Zodiac. In my opinion and experience this creates the most vivid, clear and flashing colours possible and thus most optimally fulfils the requirements made by Mathers in the above quotation.

Besides this, the generation of any colour for magical use from two of the primary three colours of Yellow, Red and Blue, gives a potentially meditative opportunity with this alchemically charged act of magic. To create a new hue or blend out of two colours is clearly reminiscent of the alchemical formula of sexual polarity, where the two primary colours take the position of the King and Queen – Father and Mother – to create the hybrid offspring or hermaphrodite with the newly generated colour.

Thus all the other colours which is placed in between the primary three of Yellow, Red and Blue, regardless of colour wheel used, are the children of these three Mothers. It therefore comes as no surprise to us then that these three primary colours are attributed to the three letters of the Hebrew alphabet that are called “mothers”.