The Freemasonic origins of the Golden Dawn 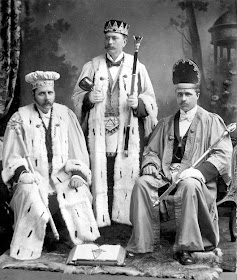 Freemasonry forms an important part of the Golden Dawn tradition. The founders, Dr. William Wynn Westcott, Dr. William Robert Woodman and Samuel Liddell MacGregor Mathers, where all high ranking Master Freemasons. They were all also initiated into the Holy Royal Arch and belonged to several other Freemasonic Rites. They were also high ranking members of the freemasonic research lodge or Rosicrucian organisation called Societas Rosicruciana in Anglia, or S.R.I.A. for short. 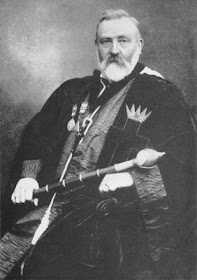 W.W. Westcott dressed up as the Supreme Magus of the S.R.I.A.
Their predecessors Kenneth MacKenzie (who wrote the Royal Masonic Cyclopedia), Fredrick Hockey and Adolphus F.A. Woodford, all had the same firm freemasonic foundation. And each and everyone of these English gentlemen somehow connected to the mysterious Cypher Mss. of the Golden Dawn. Therefore it is not strange that there is lots of evidence of freemasonic origins seen in the Golden Dawn tradition and its symbolism.

Looks familar? Actually this gentleman is not happy
because he’s the Hierophant of a Golden Dawn Temple
but instead the First Principal of a Royal Arch Lodge
The ritual structure of each Grade follows exactly the one found in freemasonic lodges. Each Grade has its opening and closing, and admission or advancement ceremony in between. Even the traditional staff of seven officers has its direct equivalence in traditional Blue Lodge or Craft Masonry. This has all been clearly analysed by the Swedish scholar on esotericism and freemasonry, Henrik Bogdan, in his doctoral thesis From Darkness to Light: Western Esoteric Rituals of Initiation.

Sceptre heads of the three Principals of the Royal Arch
Although the majority of the Grade Ceremonies of the Golden Dawn are quite distinct as to the actual contents from all known freemasonic degrees, its Neophyte Grade still bears very strong marks and obvious similarities to the First Degree of Craft Freemasonry. It clearly shares a theme with the Apprentice Degree, the journey from darkness to light. In the consequent binding with the rope, hoodwinking, swearing of an obligation (with dire consequences if breached), the circumambulations performed, the threatening at sword point, the symbolic drawing of blood, etc., you will see a striking congruence here. 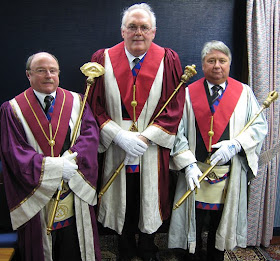 The three Principals of the Royal Arch armed with their Sceptres
Then there is the symbolism of the Neophyte Hall itself; the double cubical altar, the two Pillars – as in freemasonry often in the Golden Dawn referred to as Yachin and Boaz – the Dais with the Chiefs of the Temple, the preferred black and white tiled floor, the Quarters (points of the compass), etc. Considering this symbolism you will find that it all has freemasonic origin. Furthermore, you will find all of this symbolism summarized in the Trestle Boards of freemasonry. The Neophyte Hall of the Golden Dawn may bee seen as a three-dimensional “trestle board”, i.e. a place where the freemasonic symbolism takes a new and vivid life. 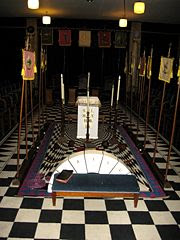 A Royal Arch Lodge
In short, I feel compelled to conclude that if freemasonry may be likened to a beautiful tapestry, then the Golden Dawn is what’s actually behind the Veil of the Sanctuary when it is finally rendered.

When you look beyond the three Craft Degrees of Entered Apprentice, Fellow Craft and Master Mason, such as the Royal Arch, the Scottish Rite, the Swedenborgian Rite, Egyptian Freemasonry, the S.R.I.A., etc., you will find even more evidence of the cross-polonisation between the Golden Dawn and freemasonry. The Grade system is almost directly taken from the S.R.I.A., or rather its predecessor of the Gold und Rosenkreutz Orden, which also at the time of its existence regarded itself to be a high degree system of freemasonry. The structure of a First, Second and Third Order, and the title of Chief, Second and Third Adepts is directly borrowed from the S.R.I.A., as is also the prototype for the Vault of the Adepti. 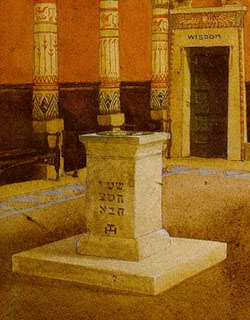 A Royal Arch double-cubical altar
The use of Greek names for the Officers, such as Hierophant, Hegemon, Hiereus, etc., is taken from the Egyptian Freemasonic Rite of Misraïm. Another example is the robes, or ceremonial cloaks, and wand designs use by these said Officers, which are taken from the Royal Arch and to some extent from the S.R.I.A, although modified somewhat when it comes to colours, even though they are quite similar also in this respect. And this is where we will linger for a moment. 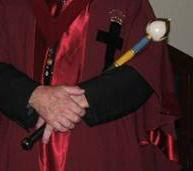 The Sceptre of the Supreme Magus of the S.R.I.A.
If you watch the Sceptre of the Supreme Magus, as held in the hands of W.W. Westcott in the previous black and white photograph, you will notice the awfully recognizable design of it. It may best be described as a cross-over between the Lotus Wand and Fire Wand of the Golden Dawn tradition. Somehow this sceptre from the S.R.I.A. became the model for these two wands of the Golden Dawn, to be vielded by the Lesser Adept. 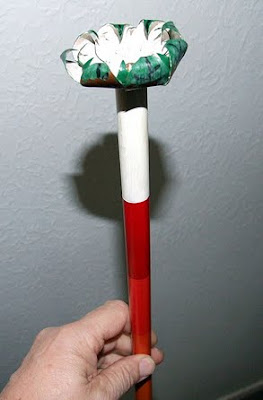 The Lotus Wand of David Edwards
of the Order of the Cubic Stone
Furthermore, looking at the pictures taken from Royal Arch Freemasonry you will notice a striking similarity between two of these pictured sceptres and the ones used by the Hierophant and the Hegemon. These three peculiar designs belongs to the so-called three “principals” of the Royal Arch, the Officers or Chiefs jointly leading the Royal Arch Lodge. The crown-headed sceptre is associated with the First Principal, Zerubbabel or Prince of Jerusalem, dressed in red. The mithre-headed sceptre is associated with the Third Principal, Joshua or High Priest, donned in light blue. Lastly the Second Principal, Haggai or the Prophet, is given the sceptre headed by the all seeing eye, attired in a dark violet. 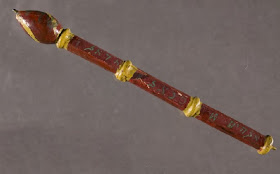 The Fire Wand of William Butler Yeats
While the crown-headed sceptre of Zerubbabel found its way into to the hands of the red cloaked Hierophant, who governs the Hall of the Neophytes with his Sceptre of Power, and as the mitre-headed sceptre of Joshua were seized by the white robed Hegemon, what then became of the sceptre of the all-seeing eye of Haggai? I believe the Second Principal is to be associated with the Hiereus (the second in command between the Hierophant and Hegemon) dressed in a black mantle, who now has been armed with the Sword to bar off any unwanted forces by the power of Geburah or Severity. 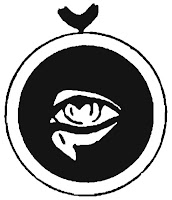 The Lamen of the Sentinel

This all seeing eye of God has its ancient origin in the Eye of Horus, and as a matter of fact the god-form of Horus is traditionally associated with the office of Hiereus. The symbol of the Eye itself found its way into the Sentinel’s Lamen, who in a way assists the Hiereus in keeping out any unwanted company from the Hall; he is the equivalent of the freemasonic Tyler. 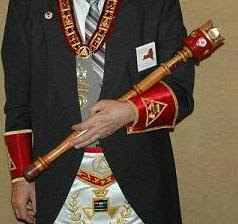 The Sceptre of the First Principal of the Royal Arch
So it seems that the Holy Royal Arch forms a particular important source or inspiration for the Golden Dawn tradition, above all other freemasonic rites. This is also evidenced in the important side lecture written by S.L. MacGregor Mathers on the Twelve Signs and the Twelve Tribes of Israel, which is based upon the twelve banners of Royal Arch Freemasonry. 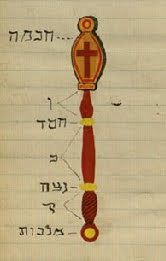 Hegemon’s Sceptre
as drawn by George Pollexfen
As the 1777 general reformation of the Gold und Rosenkreutz merged freemasonry with Rosicrucianism, the 1888 general reformation of the Hermetic Order of the Golden Dawn made them independent from each other, as now women were allowed to become initiates in the same fashion as in Egyptian Freemasonry. In my opinion the Neophyte Grade were added to the old Rosicrucian Grade system, which originally started at the level of Zelator or Juniorus, to compensate for the lack of the freemasonic degrees. As before freemasonic initiation into the Craft Degrees served as a preparation for admission into Zelator or Juniorus, now the Neophyte Grade served the same purpose. And remember the striking similarities pointed out between the Neophyte Grade, its symbolism of both ritual props and ceremony, and the First Degree of Entered Apprentice. This is clearly no coincidence.